What are the three main technical routes for white LEDs? 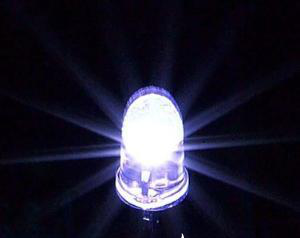 The yellow-green phosphor layer absorbs part of the blue light of the LED chip to produce photoluminescence, and the other part of the blue light from the LED chip transmits the phosphor layer and merges with the yellow-green light emitted by the phosphor at various points in the space, and the red, green and blue light is mixed to form white light; In this way, the highest theoretical value of the phosphor photoluminescence conversion efficiency of one of the external quantum efficiencies will not exceed 75%; and the maximum extraction rate of the light emitted by the chip can only reach about 70%, so in theory, blue-type white light The highest LED light efficiency will not exceed 340 Lm/W, CREE reached 303Lm/W in previous years, if the test results are accurate, it is worth celebrating.

For Group III phosphides, the emission of light into the green band has become a fundamental obstacle to the material system. Changing the composition of AlInGaP allows it to emit green light instead of red, orange, or yellow—causing insufficient carrier limitation due to the relatively low energy gap of the material system, excluding effective radiation recombination.

In contrast, III-nitride is more difficult to achieve high efficiency, but the difficulty is not insurmountable. With this system, the extension of light to the green band will cause two factors to reduce the efficiency: the reduction of external quantum efficiency and electrical efficiency. The decrease in external quantum efficiency comes from the fact that although the green band gap is lower, the green LED uses GaN's high forward voltage, which reduces the power conversion rate. The second disadvantage is that the green LED decreases with increasing injection current density and is trapped by the droop effect. The Droop effect also appears in blue LEDs, but the effect is even greater in green LEDs, resulting in lower efficiency of conventional operating current. However, there are many reasons for the droop effect, not only the Auger compound, which includes misalignment, carrier overflow or electron leakage. The latter is enhanced by the high-voltage internal electric field.

Therefore, the way to improve the light efficiency of green LEDs: on the one hand, study how to reduce the Droop effect to improve the light efficiency under the conditions of existing epitaxial materials; secondly, the photoluminescence conversion of blue LEDs and green phosphors emits green light, This method can obtain high-efficiency green light, which can theoretically achieve higher light efficiency than the current white light.It belongs to non-spontaneous green light, and the color purity caused by the spectral broadening is degraded, which is unfavorable for the display, but for the ordinary There is no problem for lighting.The green light efficiency obtained by this method has the possibility of greater than 340 Lm/W, but after combining white light, it will still not exceed 340 Lm/W; third, continue to research and find exclusive epitaxial materials, only In this way, there is a hope that after obtaining more green light than 340 Lm/w, the white light combined by the three primary color LEDs of red, green and blue may be higher than the light efficiency limit of the blue chip white LED 340 Lm/ W.

The main inherent defects of the above two white LEDs are the uneven spatial distribution of luminosity and chromaticity. The ultraviolet light is invisible to the human eye. Therefore, after the ultraviolet light exits the chip, it is absorbed by the three-primary-color phosphor of the encapsulation layer, and the photoluminescence of the phosphor is converted into white light, and then emitted into space. This is its biggest advantage, just like traditional fluorescent lamps, it does not have spatial color unevenness. However, the theoretical light effect of the ultraviolet chip white LED cannot be higher than the theoretical value of the blue chip white light, and even less than the theoretical value of the RGB white light. However, only through the development of efficient three-primary phosphors suitable for ultraviolet excitation can it be possible to obtain ultraviolet type white LEDs that are close to or even higher than the current efficiency of the above two white LEDs. The larger, the white LEDs of medium-wave and short-wave ultraviolet type are impossible.

If you want to know more, our website has product specifications for white LEDs, you can go to ALLICDATA ELECTRONICS LIMITED to get more information