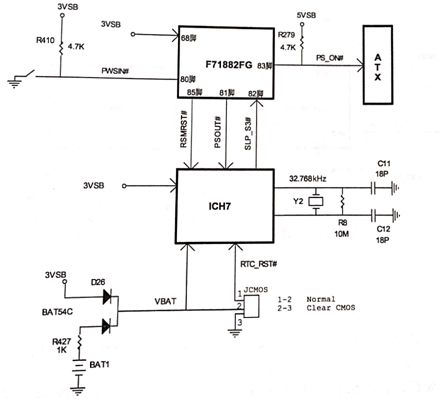 The third stage: the short switch generates the PWSIN# trigger signal to the 80 pin of the F71882FG, outputs an 3.3V-0V-3.3V voltage jump PSOUT# signal from the 81 pin through the internal logic conversion, and sends the PSOUT# signal to the South Bridge chip to request power up. The South Bridge chip receives this signal, and when its standby condition is normal, the internal conversion output lasts 3.3V of the SLP_S3 # signal to the 82 pins of the F71882FG, indicating that power is allowed. The F71882FG receives the internal conversion of the SLP_S3# signal and outputs the PS ON# continuous low level signal from 83 pins to pull the low power green cable to complete the power up.