How does PSM solve the flash problem of enterprise applications?

Today's enterprise storage subsystems are facing substantial changes. A large amount of corporate data and transaction information will increase by 50-60% every year. The rapid development of cloud computing and virtualization functions can manage these more and more data loads more effectively, leading to explosive growth in the number and scale of data centers. With the exponential growth of enterprise storage, there is an urgent need to improve the performance, capacity, and value of memory subsystems.

System administrators have found that traditional storage architectures that rely mainly on hard disk media cannot meet the demands of today's workloads in performance. The response of application planners is to use a holistic analysis method to plan the memory, combining traditional storage media and new media-flash memory in the enterprise field. The storage medium that consumer devices have always adopted is NAND flash memory. In enterprise applications, its performance is 10 to 100 times higher than that of hard disk drives (HDDs). Flash memory is also a cost-effective non-volatile storage medium, often used in data applications. By using flash memory arrays, companies can significantly reduce storage volume, the number of CPUs, and the number of software licenses, thereby reducing the total power consumption, space, and operating costs required for data center operations.

The various types of memory in certain storage subsystems and the roles they play can be viewed as a hierarchy, arranged according to performance, cost, and capacity (Figure 1). Sorted by performance, the highest end is embedded processor memory and L1 / L2 cache. The opposite end is tape backup, which has a very large capacity and low cost, but it is very slow. Among them are the main media of the storage subsystem: relatively fast but expensive DRAM, somewhat slow but relatively inexpensive and large-capacity FlashRAM, and HDD-the traditional main storage medium in the memory system. 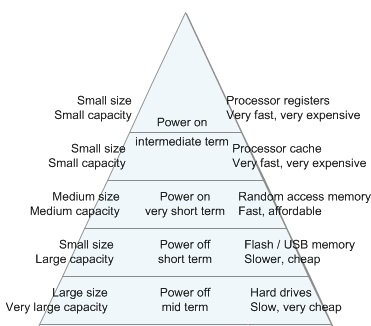 Today's storage architecture mixes various types of memory in this hierarchy. Some systems may contain several types of memory, while others are only one or two types. The type and amount of memory contained in a system depends on the amount of data, processing workload, and other factors. For applications that require large amounts of data and I / O, such as enterprise data centers, more memory types are required. HDD storage has always been and will continue to be the main data storage and access medium. However, for mission-critical applications with high performance requirements, flash memory has replaced traditional rotating storage media due to its excellent performance and competitive price.

In addition to flash memory, new types of memory are also evolving. The switching time of phase change memory is shorter than flash memory, and it is more flexible. It is still in the early stage of development. The current capacity of PCM technology is not as good as flash memory, but in enterprise-level memory applications, it may eventually become a viable option. In order to be able to manage multiple types of memory and adopt new technologies, in the design of memory array subsystems, it is necessary to use flexible and highly adaptable programmable logic devices for memory control and management.

Another consideration is flash memory access speed. In general, I / O and access speed are the limiting factors for memory system performance. Supporting standards such as PCI Express (PCIe) is critical. These standards provide an efficient pipeline between the server farm and the system. These standards, like their corresponding memory types, are developing very fast. Therefore, any flash-based subsystem should consider this trend. PLDs, especially those that provide PCIe cores and other optimized interfaces, can respond flexibly to changes and developments in these standards.

If you want to know more, our website has product specifications for PSM, you can go to ALLICDATA ELECTRONICS LIMITED to get more information