What is the spiral nanopore data storage based on polarization encryption?

Spiral plasma nanostructures have attracted wide attention in the fields of materials science and chemistry due to their inherent optical chirality. In a new study, a research team developed a unique three-dimensional Janus (nanoparticle with two or more surface properties) plasma spiral holes (spiral holes) with directional control polarization sensitivity. The spiral structure was designed using a one-step gray-scale focused ion beam milling technique (FIB). The Janus element surface is encoded with two nanopore pairs of enantiomers (left and right mirror molecules of each other) with a specific rotation angle.

For the first time, directional control polarization data encryption was demonstrated. Samples designed in this study can selectively transmit certain types of polarized light while blocking other types of polarized light. This sensitivity to polarization depends on the direction of the incident light; for example, light in a particular direction causes the array to produce a binary image, while light in the opposite direction reproduces a grayscale image. The researchers envisioned the proposed Janus spiral nanopore for a variety of applications, from polarization control of built-in photonic devices, advanced isomer sensing, data encryption and decryption, and optical information processing.

The chirality was originally defined by Lord Kelvin and used to describe any geometry that does not coincide with itself. From small biomolecules such as amino acids and nucleotides to macromolecules such as proteins and nucleic acids, and even our hands and feet, this property is ubiquitous in biological objects. Although a left-handed and right-handed version of a molecule called an enantiomer can have similar chemical and physical properties, they can perform completely different biological functions in different fields of application. Circular dichroism (CD) spectroscopy is commonly used to analyze the optical rotation of two enantiomers, but the optical effect is very weak in natural materials.

To overcome this challenge, scientists have previously developed chiral plasmonic structures to significantly increase the CD signal of chiral molecules. In addition to this purpose, there are other applications for this structure, such as miniature polarizers, nonlinear optics, and spin-controlled optics. The electric field vector of circularly polarized light (CPL) can move along a spiral trajectory, so spiral plasmonic nanostructures are of great significance. Therefore, when the swirling property of the helical nanostructure matches the swirling property of cpl, a strong photo-material interaction occurs. However, it is very challenging to fabricate such helical nanostructures in practice. 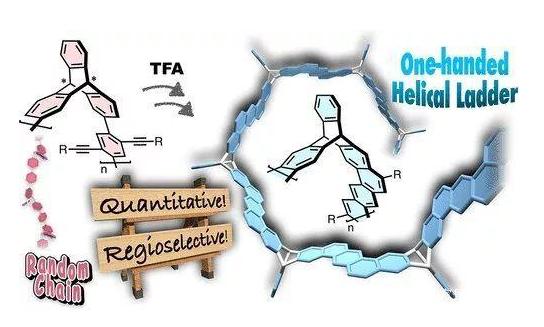 Materials scientists have previously used two-photon direct laser writing and then electroplating to create three-dimensional plasma spirals with spatial resolution limitations on the microscopic scale when applied in visible and near-infrared spectroscopy. Similarly, focused electron/ion beam induced deposition can extend the helical structure to nanostructures, but this approach lacks the speed of mass production. Therefore, in order to conveniently and quickly prepare plasma spiral nanostructures having a large CD signal, a high resolution alignment and fine operation lithography apparatus is currently required. In the present study, a three-dimensional Janus plasma spiral nano-aperture was etched onto a single piece of optical thickness gold film having arc holes and arc gradient grooves, both end-to-end connected.

The chiral helical nanopore is present in both enantiomeric forms "A" and "B" based on increasing the depth of the gradient groove in a clockwise or counterclockwise direction, which are mirror images of each other. The scientists used high-dose Ga+ ions in the focused ion beam milling process, and finely adjusted the focusing and astigmatism of the ion beam to form a three-dimensional spiral nanopore array with satisfactory uniformity. Then, the basal properties of the three-dimensional plasma spiral nanopore in the positive direction when circularly polarized light (CPL) was irradiated onto the gold surface and transmitted from the silicon substrate were investigated.

Numerical simulations using COMSOL Multiphysics agree well with experimental results. The scientists modeled the three-dimensional spiral nanopore as a series of cascaded curved waveguide segments to achieve the desired optical chirality. In the experimental setup, if the rotational directivity of the circularly polarized light matches the gradient trench impartivity, the incident optical power can be collected