Will OLED display technology become mainstream in the next decade?

According to the driving method, OLED can be divided into PMOLED and AMOLED. PMOLED simply uses a cathode and an anode to form a matrix, and scans the pixels in the array in a scanning manner. Each pixel emits light with high brightness instantly in a short pulse mode.

In recent years, AMOLED has become more and more popular, and commercial demand has continued to grow. About seven or eight years ago, AMOLED output value has surpassed PMOLED and has become the mainstream OLED technology. 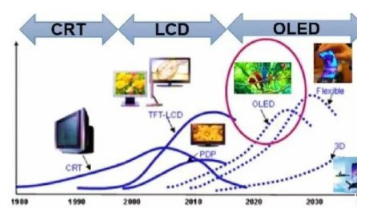 In the field of OLED terminal applications, mobile phones contribute the most. According to statistics, in 2018, the proportion of smartphones in downstream OLED applications was as high as 71%, followed by wearable devices by 10%, TV and household appliances by 6%, and other areas by 10%.

In addition, the penetration rate of OLED panels in the mobile phone market will exceed 35% in 2019, and it will gradually replace LCD mobile phone panels as the new generation of mainstream display technology by 2021.

As for the TV industry, OLED is another major application market. According to DSCC forecasts, OLED TV panel shipments in 2018 were 2.9 million, an increase of 66% annually, and it is estimated that the annual growth rate in 2019 will reach 28% to 3.6 million.

In the future, the penetration rate of OLED panels in downstream applications will increase. DSCC estimates that the global market output value of OLED panels will reach 51.1 billion US dollars in 2022, with a compound annual growth rate of 21% from 2019 to 2022. The mobile phone field is still the largest application market and is the main demander of OLED technology in the next few years; while the television field is the second largest market, the penetration rate is relatively low, mainly because of the current cost and service life of OLED technology. Both are inferior to LCD technology, and with the development of a variety of new technologies, OLEDs will compete with emerging technologies such as quantum dots, Mini LEDs, and Micro LEDs in the future.

If you want to know more, our website has product specifications for the OLED display, you can go to ALLICDATA ELECTRONICS LIMITED to get more information