What are the interfaces on motherboards?

The interfaces on the motherboard  are shown in figure 1. 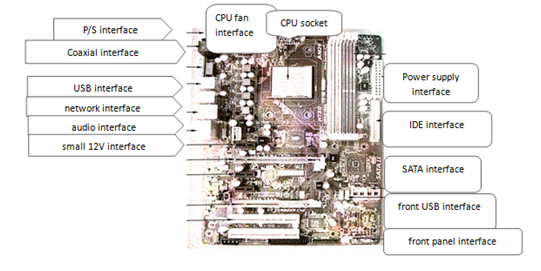 When the motherboard works, CPU, North Bridge Chip, South Bridge Chip will generate heat. In order to prevent chip damage, the heat-emitting chip plus cooling fan for heat dissipation. The common CPU fan interface (see figure 5, represented by CPU_FAN > is used to connect the CPU fan, and the system fan interface (see figure 6, shown in SYS_FAN) is used to connect the cooling fan other than the CPU fan. There is only one system fan on the main board ofIntel and DELL brand machine. When the fan is not connected, the error will be reported when the fan is turned on. The ordinary motherboard without CPU fan will also report the error, and will prompt F1 to notify the user to install the fan.

The front panel pin (figure 17) is a pin connecting the front control part of the chassis. The pin arrangement includes power switch, which is indicated by PS,PW,SW,PSON, reset switch  by RST, power indicator by PW_LED and hard disk indicator by HDD_LED.

The CMOS jumper (see Fig.18), also known as the discharge jumper, refers to a jumper that provides a reset signal for the RTC circuit inside the Nanqiao chip. The common three needles are divided into normal mode and clearance mode, jumper cap in 1-2 pin for normal mode, jumper cap in 2-3 pin for clearance mode (that is, often said to discharge). There are only two jumpers in the Gigabyte motherboard (Fig.19). Jumper cap isn't installed in normal working condition, when it is necessary to remove the jumper cap from CMOS fashion.

Part of the main board there is a USB,P/S2 power supply jumper (figure 20), mainly to achieve keyboard boot function. By means of jumper wire setting, the keyboard can be powered by the mainboard without power, and the user can set it up according to his own needs.