How to convert blue OLED to white OLED? 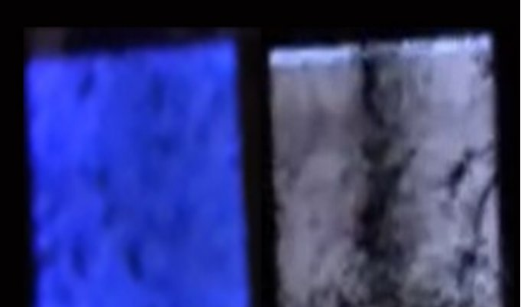 Before adding a distributed Bragg [1] reflector to produce a blue light emitting OLED before (left) and after (right) white light, the reflector converts the blue light into white light of two color temperatures.

Since the first working device was reported 30 years ago, organic light-emitting diodes (OLEDs) have made great strides. OLED is highly praised for its many advantages such as black color, clear image reproduction and energy saving. Now it is dominant in the screen of mobile phones and LG TVs. It is expected that OLED may take over the iPhone screen as early as next year.

Konstantinos Daskalakis, a postdoctoral researcher at Aalto University in Finland, said that because OLEDs are relatively low-cost and easy to manufacture, we should consider using them to create white light for general lighting.

Exciting white light is the fatal weakness of OLED. Normally, in order to get white light, individual red, green, and blue emitters will emit light at the same time, resulting in white light. This makes white the most power-consuming color, which is reported to require six times the amount of electricity needed to produce black on Google pixels. Other methods of generating white light include doping chemicals in the emitting layer, but this method makes manufacturing equipment more difficult.

In a proof-of-concept experiment, Daskalakis and his tutor Paivi Torma converted a traditional blue-emitting OLED into a white-emitting OLED. The method is very simple, that is, placing a group of high and low refractive index on the OLED A distributed Bragg reflector (DBR) made of alternating materials.

The so-called DRB is usually used as a mirror to manufacture the optical cavity in the device. Instead, Daskalakis and Torma decided to use the so-called Bragg fiber mode that resonates within DBR, using DBR as the converter. Bragg fiber mode can be tuned by changing the thickness of the DBR layer. Daskalakis introduced that these modes occur in the red, green and blue bands. When the blue light of the OLED passes through the DBR, some high-energy blue photons will be converted into low-energy red and green photons. The mixture produces white light from the device.

At the same time, by applying reflectors to different types of OLEDs, the quantum efficiency of the device can be optimized separately. Compared with the ordinary blue OLED, the quantum efficiency of the converted white OLED is increased by 20%. Moreover, the modified white OLED can continue to work after two months, while the ordinary blue OLED stopped working the next day.

Torma hopes this work will inspire other researchers to find more uses for DBR. "They are a bit overlooked," "especially the Bragg mode, people usually think that it is better to have a very narrow mode, but we found that these methods are actually very suitable for our purpose.

The two companies have applied for patents, and are working to further characterize and optimize the design of the device, so that this technology can show its potential in the potential applications of lighting and consumer electronics.

If you want to know more, our website has product specifications for OLED to white OLED, you can go to ALLICDATA ELECTRONICS LIMITED to get more information