What is the working principle of the primary battery?

The primary battery is a device that converts chemical energy into electrical energy by utilizing the difference in potential between the two electrodes to generate a potential difference thereby causing the electron to flow. Since the reversibility of the redox reaction of various types of primary batteries is very poor, after being discharged, it cannot be reused, so it is also called a primary battery.

Taking the copper-zinc battery as an example, the mechanism of generating electric energy from the primary battery is explained. Such a battery, as shown in Figure 1, consists of a "half cell" consisting of a copper electrode inserted into a CuSO4 solution and a half cell consisting of a zinc electrode inserted into a ZnSO4 solution. The two half-cells are connected by an inverted U-shaped tube filled with a gel made of saturated KCl solution and agar, called a "salt bridge." At this time, if the two poles are connected by wires and an ammeter is connected in series, the galvanometer pointer will deflect, indicating that current is flowing through the line. At the same time, it can be observed that the zinc sheet begins to dissolve and copper deposits on the copper sheet. 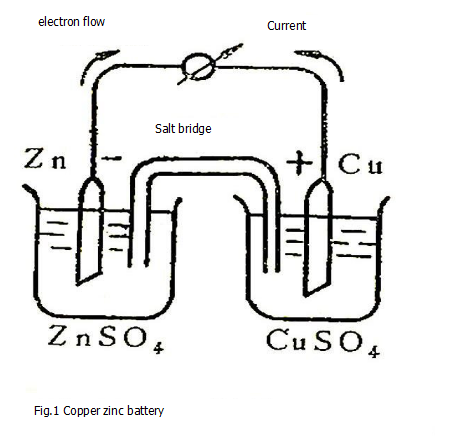 We explore further the reasons for the current generated by this device from the observed experimental phenomena. According to the order of metal replacement, zinc is more active than copper, and zinc easily loses two electrons to become Zn2+ into solution Zn ⇋Zn2++2e, leaving electrons on the zinc electrode, causing the zinc to be negatively charged, called "negative electrode". If a wire is used to connect the zinc electrode to the copper electrode, at this time, electrons flow from the zinc electrode to the copper electrode through the wire, and Cu2+ around the copper electrode is electron-reduced from the copper electrode into metal copper, Cu2++2e ⇋Cu, deposited on the copper pole, the copper pole is called the "positive pole". In order to maintain the electrical neutrality of the two cups of solution, the salt bridge begins to conduct the internal circuit of the battery, and the Cl- ions diffuse from the salt bridge to the left solution to balance the positive charge of the Zn2+ dissolved by the zinc electrode. K+ diffuses from the salt bridge to the right solution, and is balanced with the negative charge of the SO42-ion left by the deposition of Cu2+ as metallic copper. This allows the dissolution of zinc and the precipitation of copper to continue, and the current continues to flow. Therefore, the current flowing through the entire system is carried out by the transfer of free electrons in the metal conductor and ions in the solution and the accompanying oxidation and reduction reactions at the electrode and solution interfaces.