How to use the formula to find the magnification of the triode amplifier circuit?

The formula of the three magnifications is not difficult. The difficulty is how to use it. This time I found a three-stage amplifier circuit, and the AC circuit is shown in the figure. 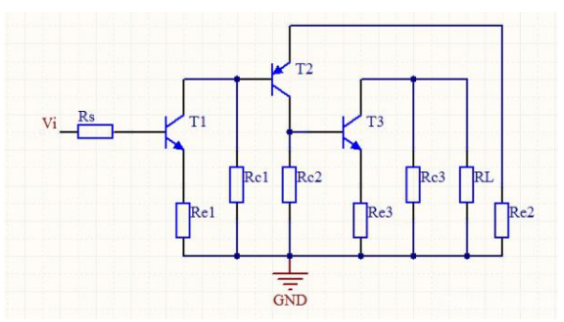 This three-stage amplifying circuit is a common-emitter amplifying circuit. A good way to judge whether it is a common-emitter amplifier circuit is to see where the current flows from. If the current flows from the base into the collector, then this is the common-amplifier circuit. Obviously the above three levels are satisfied. For this cascaded circuit, the total voltage amplification is equal to the product of the magnifications of the stages, first looking at the first stage.

β is generally given in the circuit, R b b' is either negligible or directly given, and Rb'e needs to be derived from the static operating point. Re is the resistance connected to the emitter. It is hard to find R L'.  R L ' represents the resistance of the resistor R c and RL in parallel, and R c is the R of the figure below. c 1, RL is equivalent to the equivalent resistance seen from the second-stage amplifier circuit.

Here, R L is actually equal to R b b'2+R b' e 2+(1+β2)R e 2, so that the amplification factor of the first-stage amplifying circuit can be written.

It is relatively simple to complete the first level and second level. As with the first level, if you directly bring the formula, it is hard to find R L', R c is R c 2 in the above figure, RL stands for The three-stage input resistance is obtained by R b b'3+R b' e 3+(1+β3)R e 3, and then substituted into the formula to find the formula of the second-stage amplifying circuit.

If you want to know more, our website has product specifications for the triode amplifier, you can go to ALLICDATA ELECTRONICS LIMITED to get more information