What is the working principle of the bias circuit in the triode amplifier circuit? 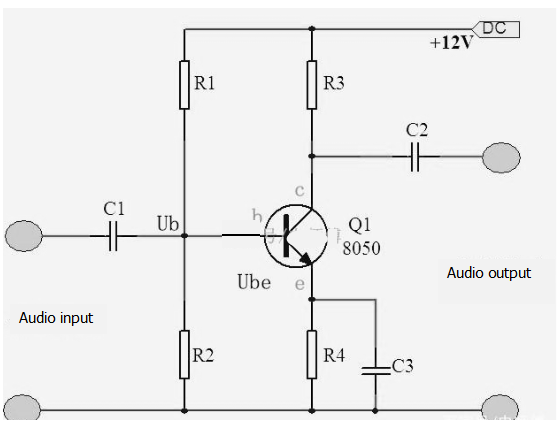 In the amplifying circuit, a current negative feedback bias circuit is usually used. This paper mainly explains the stable working principle of the bias circuit.

R1, R2: called the base voltage divider resistor, which provides the base current for the circuit core amplifier transistor. When the base current (Ib) changes, Ub (the voltage across R2) remains substantially unchanged.

The principle of stable operation of the amplifier circuit

2: R4 feedback resistance amplifier circuit key components, appropriate increase R4 resistance value, the greater the feedback, the stability is good. Therefore, it is necessary to make a reasonable choice according to the actual circuit design. In order to reduce the loss of AC energy on R4, the C3 capacitor is added to bypass the AC to the ground, and the AC gain of the amplifier circuit can be improved.

3: The current negative feedback bias circuit has good temperature stability. As long as the proper bias resistance is selected and a reasonable DC operating point is designed, the amplifier circuit can work stably and reliably. Therefore, it is a bias circuit that is widely used in an amplifying circuit.

If you want to know more, our website has product specifications for the triode amplifier, you can go to ALLICDATA ELECTRONICS LIMITED to get more information