[example 1] to measure a resistor of 10 kilohm, as shown in figure 1, first plug the red and black pens into the V (Q) and COM Jack respectively, the range switch to the 20-kilowatt block, the power switch to the ON position, the display screen shows "1" (open circuit). Then contact the two pens with both ends of the resistance to be measured. When the reading is stable, it shows 10.1 kilohm, which is the result of the measurement. The general resistance is allowed to have an error of + 5%.

Ordinary digital multimeter, such as DT830A, DT890A and so on, without conductivity measurement, can only measure resistance below 20MΩ. For high resistance greater than 20MΩ, the following methods can be used to measure, take the DT830A digital multimeter as an example.

Figure 1 shows how to connect when measuring high resistance. The digital multimeter knob should be turned to the appropriate DC voltage shift, such as the 200mV DC voltage shift. Use the digital multimeter hpp socket to measure the C Jack of the NPN tube or the E Jack of the PNP tube as one of the pins of the measured resistance Rx (the purpose is to remove the signal voltage source from the C Jack or E Jack and provide the test voltage to the measured high resistance Rx). The other-end of the Rx is plugged into the V / Q Jack, and the specific measurement connection circuit is shown in figure 2. 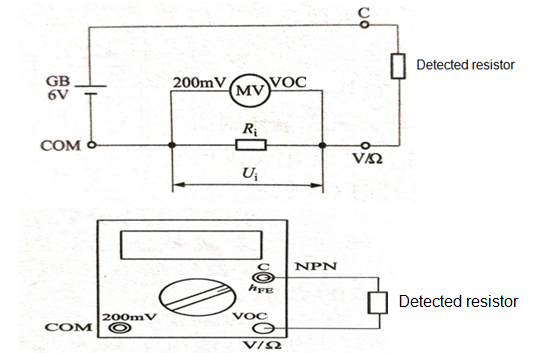 It can be seen from the partial voltage principle of series resistors in fig. 2 that the measured height resistor Rx can be calculated by the following formula.

The reference voltage value of the Eo- digital multimeter is generally 2. 8V;

Third, the choice of the position.

If the measured high resistance Rx value is very large, according to the above-mentioned partial voltage formula, the Ui value measured with the digital multimeter must be very small, so the multimeter should adopt the lowest voltage shift. For the DT830A digital multimeter, the 200mV gear can be used to measure it.

However, since the voltage resolution of the DC200mV block is 0.1 MV, if the measured voltage is less than 2 MV, the measurement error will be increased. In order to ensure the accuracy of measurement, a certain amount of allowance should be set aside. That is, the actual U; measurement drops to 2mV. DT830A digital multimeter has three voltage range shields that can be selected, usually referring to the following principles reasonable selection of the retaining position.

(2). When the measured resistance Rx is greater than 500MΩ, the DC200mV block can be selected.

The above-mentioned method of measuring high resistance resistor can also be used to measure the insulation resistance of diodes, quartz, crystal oscillators, capacitors and other components as well as printed circuit boards and cable wires so as to determine the degree of leakage. Since this measurement is carried out at low voltage, there will be no damage to the tested components.