Do you know what are the proximity sensor applications?

Proximity sensors have the characteristics of long service life, reliable work, high repeat positioning accuracy, no mechanical wear, no sparks, no noise, and strong vibration resistance. It can be used as limit, counting, positioning control and automatic protection in the automatic control system. It is widely used in machine tool, metallurgy, chemical, light textile and printing industries.

Application of Proximity Sensor in Robot Hand Holder Robot hand holder is a mechanical structural component with multiple degrees of freedom that can grasp objects smartly. It can be used in various industrial automation production, assembly and operations, and can perform tasks such as information detection, item collection and detection, and detonation in high-risk environments. Robot hand grippers generally use a pincer structure to grip objects in an open and closed manner. Therefore, the precise measurement and control of the opening and closing degree of the "jaw" is a key factor that directly affects the success of the gripping process.

Since the proximity sensor can sense changes in distance and position, it is also a commonly used sensor device in robot hand holders to measure opening and closing conditions. It uses the change in magnetic field and the relative positional relationship of the metal part to measure. Usually, the sensor is installed on one of the clamps of the gripper. When gripping an object, the proximity sensor can determine the distance between the two (clamps) by sensing the change in the magnetic field. Therefore, it can be compared with the set value, and the opening degree of the hand gripper can be adjusted to avoid scratching or damaging the object. 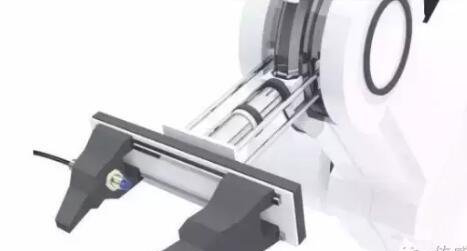 Car access control: Detect your hand approaching the door handle to start the unlocking process.  When the palm is close to the screen surface, the touch screen can be illuminated and awakened. Simple movements in the air to turn on / off the device Detect large obstacles around the car during parking

An example of capacitive proximity detection is the application in a car access control system (see the figure below). The proximity sensor that detects the approach of a human hand is located inside the door handle

(1) Once an object is detected approaching, the main control unit

(2) sends a wake-up signal through the low-frequency antenna

(5) if the encoded information matches the main control unit

(6) the car door lock is opened. The entire process of proximity detection and ID recognition is about a fraction of a second. This means that when the handle is pulled, the door lock is already open.

Compared with touch detection, the advantage of using proximity detection in a car access control system is that it can preempt the time of identifying the owner of the car. As a result, the door lock is already open before the door is pulled. 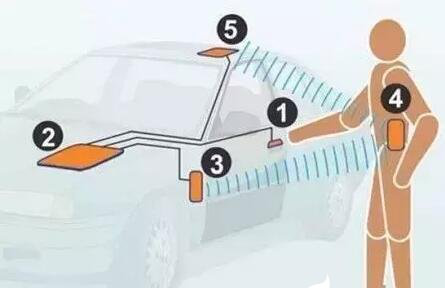 The detection space gesture is used to turn the device on or off, and is also a common application in automotive electronics. Using two or more capacitive proximity sensors simultaneously, the device can be turned on or off by detecting simple movements of the palm in the air (such as waving a hand in front of the device under test). The figure below shows a simple example of using such a system to turn on / off the interior lighting of a car. Waving in one direction towards the light turns on the light, and waving in the opposite direction turns off the light. The system can analyze the signals from the proximity sensors to determine whether the gesture indicates whether the light is on or off. There are many different ways to design sensing electrodes in electric lamps, from using thin copper wires to using conductive polymers that can be directly attached to plastic. 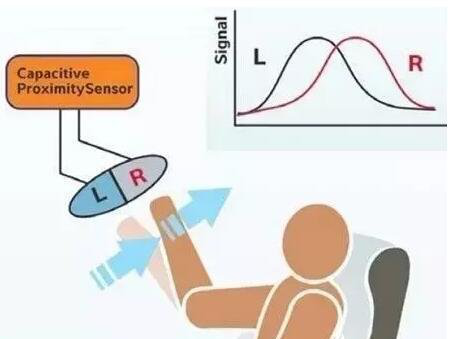 At present, the commonly used scheme of the screening door system to detect the opening and closing of the door is generally to detect the opening and closing of the door through two proximity switches. Since the proximity sensor can detect non-contact, it will not wear or damage the detection object. This is also one of the main reasons it is suitable for installation on subways. As the performance of the proximity sensor is further improved, it will be used in more occasions. In the future, it will be used not only for subway doors, but also for other shielded doors such as buses.

Application of Proximity Sensors in Touch Screen Mobile Phones Proximity sensors use MEMS technology and have gained popularity in smartphones.

When touch screen mobile phones became popular, users discovered a flaw in touch screens: when we picked up the phone in the most common poses, our faces often touched the touch screen, and we accidentally clicked the on-hook or hands-free key, causing Unnecessarily awkward. Therefore, mobile phone manufacturers use MEMS technology to design MEMS proximity sensors into touch screen mobile phones, which automatically lock the screen when receiving a call to avoid false triggering. In addition, the screen can be turned off while the screen is locked, which can effectively save energy and prolong standby time.

Smart phones use MEMS ambient light sensors and proximity sensors: ambient light detection (to determine the surrounding brightness or darkness based on the amount of light detected by the light receiving unit based on the sensor's illuminance) and proximity detection (from light emitted from a light source with a sensor to On the measurement object, determine the distance from the measurement object based on the amount of light reflected to the sensor's proximity light receiving unit). The ambient light sensor can optimize the lighting of the LED background light, so that our mobile phone can self-adjust to a suitable brightness in any environment, whether in a dim movie theater or a well-lit outdoor. The proximity sensor can turn off the touch screen when receiving a call, so we don't touch the buttons on the screen to cause the call to hang up suddenly or turn on other functions.

If you want to know more, our website has product specifications for proximity sensor， you can go to ALLICDATA ELECTRONICS LIMITED to get more information