How to design a battery-powered energy-saving solution?

When not changing batteries or charging, I often feel that I am constantly restoring all kinds of depleted personal electronic devices to full functionality. Although I always pay attention to the power status from time to time, it is not uncommon for wearable fitness equipment or Bluetooth headsets to shut down during exercise. Not to mention, it is common for smartphones to shut down due to power exhaustion at the worst time.

Just a few personal electronic devices are already overwhelming. From this, it is conceivable that Internet of Things (IoT) applications with thousands of battery-powered devices are likely to collapse because of battery maintenance.

For those large-scale IoT networks and personal devices, the demand for real-time data from "normally open" sensors has caused the impact of power problems to continue to magnify. Fortunately, as silicon manufacturers continue to improve the energy efficiency of microcontrollers and share some processing load with the main processor, this bleak situation of insufficient power supply for electronic devices has only improved.

According to traditional methods, microcontroller-based system power management is mainly focused on the duty cycle of the main processor, because the main processor usually bears most of the power consumption of small embedded systems. Therefore, designers are generally required to minimize the power-on time of the processor's maximum power consumption, and instead design a system with limited power to keep the processor in the energy-saving sleep mode as much as possible. For applications that require regular data collection from sensors, developers let the processor sleep and use peripheral interrupts, wake up the processor to collect and process data, and then immediately resume the sleep state.

Peripheral has independent processor While separating peripheral functions and core processing, more advanced microcontrollers have improved these peripheral subsystems with dedicated processors. For example, Maxim Integrated ’s Darwin series, like many such devices, includes a peripheral management unit (PMU), which not only supports direct memory access (DMA) operations, but also includes polling scheduling and other more advanced features. This practice of extending processing power beyond the processor core has become the basis for some of the most effective ways to reduce power consumption and improve performance today. Hardware encryption accelerators are a typical example of this trend. These accelerators are built into most advanced microcontrollers designed for IoT devices or other connected applications. By speeding up the execution of the algorithm, a dedicated accelerator can quickly restore the device to a low-power state. Another more interesting example of this trend is wireless microcontrollers such as Texas Instruments' SimpleLink series. For example, Texas Instruments ’CC2640R2F Bluetooth Low Energy (BLE) wireless microcontroller combines an Arm® Cortex®-M3 main processor with a dedicated BLE subsystem, which includes an Arm Cortex-M0 dedicated processor and radio frequency (RF) Transceiver (Figure 1). 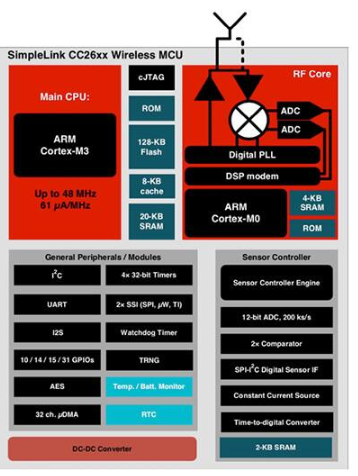 When the main processor is running the application, the developer cannot use it] Of course, the demand for normally open functions is not just for connectivity. In more and more detection applications, users expect the device to respond to changes in temperature, motion, air quality, and other characteristics in an instant. If the traditional method is used, this normally-on function will force the microcontroller to run continuously or almost continuously in active mode, while collecting and checking data on important events. Many advanced sensors allow developers to program minimum and maximum thresholds that trigger interrupts, keeping the microcontroller in sleep mode until an event that exceeds the threshold occurs. However, in some applications, the threshold function alone is not enough.

For example, a normally-open motion sensor may need to identify a characteristic change or a specific pattern in the measured acceleration or direction, which means that the device user is walking, running, climbing stairs, turning, or doing other activities. Even with advanced sensors with threshold functions, the host microcontroller needs to remain active to recognize these characteristic changes.

If you want to know more, our website has product specifications for battery, you can go to ALLICDATA ELECTRONICS LIMITED to get more information